Frank holds a DTh from the University of Zululand. He is a senior lecturer at the South African Theological Seminary.

The term ‘evangelical’ in a Dutch context needs an explanation. In the Netherlands, this term is used broadly for Christians of different denominational backgrounds, such as Reformed, Pentecostal, Baptist and Brethren. Evangelical in this context is ‘conservative’, or as some prefer ‘faithful to Scripture’.
Download Article
Read More

Be Filled With the Spirit and Not with Wine

Annang Asumang is a medical doctor practising medicine in England. He holds an MTh in Biblical Studies from the South African Theological Seminary.

Ephesians 5:18 contrasts wine drinking with being filled with the Holy Spirit. There are a number of reasons, both in the text and the socio-cultural context, to suggest that Paul is not primarily addressing an ongoing problem of alcohol abuse in the congregation. Instead, this article will suggest that he is using the antithesis as a double-edged theological foil to describe the practical inauguration of the Messianic Banquet in the life of the church.
Download Article
Read More

Book Review A Letter to Africa about Africa

The objective of this short book is to argue that the root cause of the social evils that afflict Africa have their roots in an unbiblical worldview, and the appropriate treatment is “theotherapy”, helping African Christians to embrace a biblical worldview.
Download Article
Read More

The purpose of this article is to provide a readable description of direct translation, an approach that emerges logically from a relevance theoretical perspective on communication. Direct translation is an approach that strives to attain the highest possible level of resemblance to the source text. It does this by transferring the source's communicative clues and requiring readers to familiarise themselves with the its context, an assumption that minimises the need to provide contextually implicit information, explicate figurative language, adopt inclusive language or remove ambiguities.
Download Article
Read More

Evaluating the Changing Face of Worship

Noel Woodbridge holds a DEd from UNISA and a DTh from the University of Zululand. Noel was a lecturer in the Faculty of Education at UNISA for 13 years, serving the last few years as an Associate Professor before joining the faculty of the South African Theological Seminary in 2003.

The desired approach to worship in the Emerging Church is a revival of liturgy and other ancient traditions, brought back with life and meaning. The aim of this paper is to answer the question: Is Emerging Worship a modern-day revival or is it merely a return to ancient traditions? In particular, an attempt will be made to evaluate some of the common values or characteristics of Emerging worship gatherings in terms of the ECLECTIC model.
Download Article
Read More

One of the most divisive issues facing the Christian church today is the ubiquitous issue of the acceptance of homosexual behaviour within the parameters of church leadership. Revisionist theologians contend that the church must redress her stance on this issue to keep in step with the prevailing culture of the day, which favours the acceptance of homosexual behaviour due to its proposed biological determinism.
Download Article
Read More

Annang Asumang is a medical doctor practising medicine in England. He holds an MTh in Biblical Studies from the South African Theological Seminary.

The Book of Ephesians remains one of the main sources for understanding Paul’s doctrine of the nature, influence and conquest of the evil powers. Yet, the process of applying this teaching into the contemporary setting has been fraught with difficulties.
Download Article
Read More

Malcolm graduated with a Master of Theology from the South African Theological Seminary in 2007. This article emanates from his MTh thesis, entitled “Sustained church planting as a primary means of fulfilling the Great Commission, with special reference to New Covenant Ministries International”, supervised by Dr CL Peppler.

Chris is the founder and chairman of the South African Theological Seminary. He holds doctorates in different fields of Christian studies. He has also served as the senior pastor of the Lonehill Village Church for the past 20 years.

This article briefly examines the current return to apostolic Christianity in various parts of the world and references three earlier Christian movements that came into existence at approximately 100-year intervals, beginning with the Methodist movement in the 1700s, culminating with observations of a current apostolic movement that began in the early 1980s, known as New Covenant Ministries International, in an attempt to ascertain how they embraced early apostolic principles.
Download Article
Read More

Teach Us to Number Our Days

Psalm 90 is a communal lament authored by Moses in which he sought the wisdom and favor of the Lord. Perhaps toward the end of the Israelites’ 40-year period of wandering in the desert, the great lawgiver, intercessor, and advocate of God’s people reflected on the brevity of human existence, especially against the backdrop of Yahweh’s eternality.
Download Article
Read More

The Divine Sabotage: An Exegetical and Theological Study of Ecclesiastes 3

The author uses the concept of the “divine sabotage” as a starting point for an exegetical and theological study of Ecclesiastes 3. He notes that on the one hand, God has “set eternity in the human heart” (v. 11). Yet, on the other hand, “no one can fathom what God has done from beginning to end”. The author explains that God has imposed limitations on the human race that undermine their efforts to look beyond the present—especially to understand the past and probe into the future.
Download Article
Read More

The eternal generation of the Son

Bill Grover holds an MA in Religion (Point Loma Nazarene University), ThM in Biblical Studies (Western Seminary) and a DTh in Systematic Theology (University of Zululand). He is presently co-authoring a book with H. Wayne House, to be called Does God Feel Your Pain? Bill fellowships and teaches Sunday school at Grace Baptist Church in Salem, Oregon. He presently serves as postgraduate supervisor for the South African Theological Seminary.

The writer, himself an American evangelical, intends to discuss, in three articles, areas in which American evangelicals disagree about how God the Son relates to God the Father and the meaning and effects of the true humanity and the true deity in Christ. Each position will be defined and exemplified. The rationale offered by proponents of each position is provided. Evaluations are made.
Download Article
Read More
12345678910111213141516171819202122232425262728293031323334 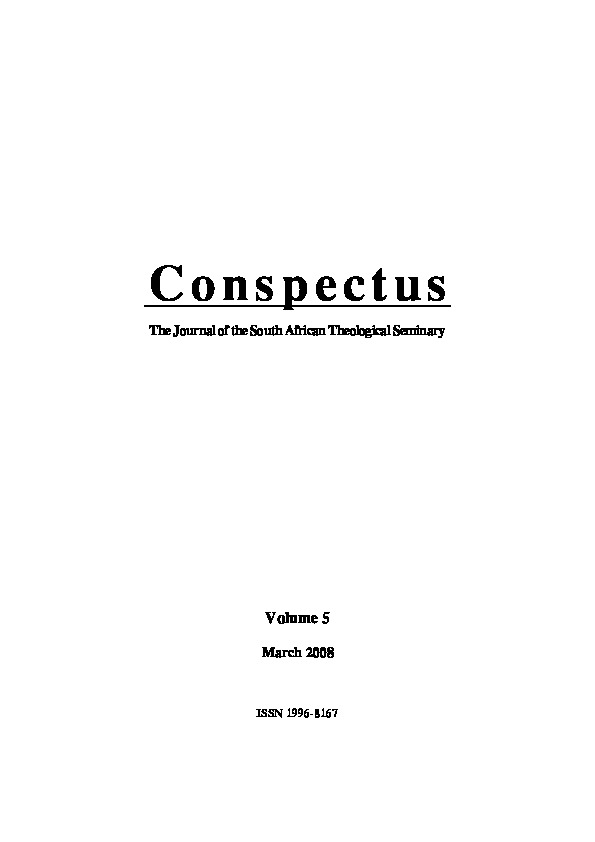