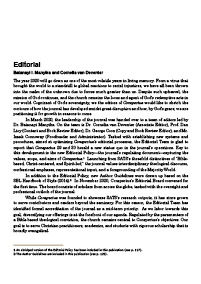 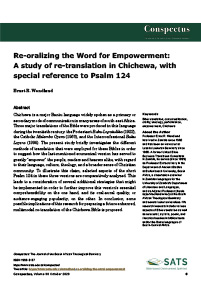 Re-oralizing the Word for Empowerment: A study of re-translation in Chichewa, with special reference to Psalm 124

Professor Ernst R. Wendland has lived in Zambia since 1962 and has been an instructor at Lusaka Lutheran Seminary since 1968. A former United Bible Societies Translation Consultant in Zambia, he serves (since 1999) as Professor Extraordinary in the Department of Ancient Studies at Stellenbosch University, South Africa, a dissertation examiner in Zambian languages for the University of Zambia’s Department of Literature and Languages, and as Adjunct Professor (thesis supervisor/examiner) at the South African Theological Seminary and several other universities. His research interests include various aspects of Bible translation as well as structural, stylistic, poetic, and rhetorical studies in biblical texts and/or the Bantu languages of South-Central Africa.

Keywords: Bible translation, contextualization, orality, theology, performance, empowerment, Chichewa
Chichewa is a major Bantu language widely spoken as a primary or secondary mode of communication in many areas of south-east Africa. Three major translations of the Bible were produced in this language during the twentieth century: the Protestant Buku Lopatulika (1922), the Catholic Malembo Oyera (1966), and the Interconfessional Buku Loyera (1998). The present study briefly investigates the different methods of translation that were employed for these Bibles…
Download Article
Read More 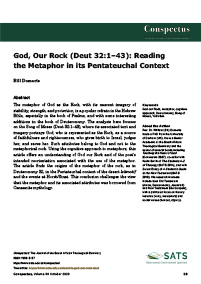 God, Our Rock (Deut 32:1-43): Reading the Metaphor in its Pentateuchal Context

Rev. Dr. William (Bill) Domeris holds a PhD from the University of Durham (UK). He is a Senior Academic at the South African Theological Seminary and the author of several books including Touching the Heart of God (Continuum 2007), co-editor with Kevin Smith of The Students A-Z of Theology (SATS 2014), and with Zoltan Erdey of A Student’s Guide to the New Testament (SATS 2019). His research interests include both Old Testament (Amos, Deuteronomy, Jeremiah) and New Testament (the Gospels), with a particular focus on literary features (irony, metaphors) and social values (honour, dignity).

Keywords: God our Rock, metaphor, cognitive approach, Deuteronomy, Song of Moses, Yahwism
The metaphor of God as the Rock, with its nascent imagery of stability, strength, and protection, is a popular refrain in the Hebrew Bible, especially in the book of Psalms, and with some interesting additions in the book of Deuteronomy. The analysis here focuses on the Song of Moses (Deut 32:1–43), where its associated text and imagery portrays God, who is represented as the Rock…
Download Article
Read More 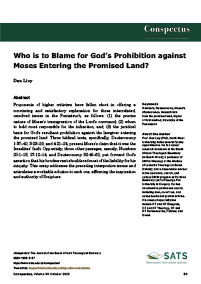 Who is to Blame for God’s Prohibition against Moses Entering the Promised Land?

Prof. Dan Lioy (PhD, North-West University) holds several faculty appointments. He is a senior research academic at the South African Theological Seminary (in South Africa); a professor of biblical theology at the Institute of Lutheran Theology (in South Dakota); and a dissertation advisor in the semiotics, church, and culture DMIN program at Portland Seminary (part of George Fox University in Oregon). He has an extensive publication record, including solo, co-written, and edited books and journal articles. His areas of specialization include OT and NT Exegesis, OT and NT Theology, OT and NT Hermeneutics, Hebrew, and Greek.

Keywords: Numbers, Deuteronomy, Moses’s disobedience, Moses’s ban from the promised land, higher critical method, historicity of the Pentateuch
Proponents of higher criticism have fallen short in offering a convincing and satisfactory explanation for three interrelated, unsolved issues in the Pentateuch, as follows: (1) the precise nature of Moses’s transgression of the Lord’s command; (2) whom to hold most responsible for the infraction; and, (3) the juridical basis for God’s resultant prohibition against the lawgiver entering the promised land…
Download Article
Read More 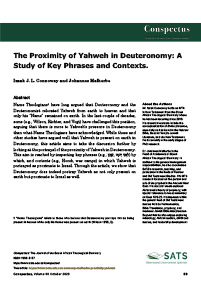 The Proximity of Yahweh in Deuteronomy: A Study of Key Phrases and Contexts

Mr. Izaak Connoway holds an MTh in New Testament from the South African Theological Seminary where he has been lecturing since 2015. His research interests include the conceptualization of divine presence, especially as it is found in the Hebrew Bible, Second Temple Jewish Literature, and the New Testament. He is currently in the early stages of PhD research.

Dr. Johannes Malherbe is the Head of Quality Assurance and Innovation at the South African Theological Seminary. In addition to his general management responsibilities, he also coordinates SATS’s research, teaching, and publication in the fields of Hebrew and Old Testament Studies. His MTh research focused on the person and role of the prophet in the Ancient Near East. His doctoral thesis explored Abravanel’s theory of prophecy, with special reference to his commentary on Deut 18:9–22. His interests within the general field of Old Testament studies include Hermeneutics, Bible Translation, prophecy, and medieval Jewish Bible interpretation. Beyond that he also enjoys exploring missiology, African studies, childhood studies, and leadership development.

Name Theologians have long argued that Deuteronomy and the Deuteronomist relocated Yahweh from earth to heaven and that only his “Name” remained on earth. In the last couple of decades, some (e.g., Wilson, Richter, and Vogt) have challenged this position, arguing that there is more to Yahweh’s presence in Deuteronomy than what Name Theologians have acknowledged…
Download Article
Read More 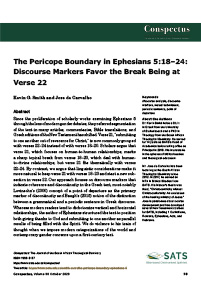 The Pericope Boundary in Ephesians 5:18-24: Discourse Markers Favor the Break Being at Verse 22

Dr. Kevin Smith holds a DLitt in Greek from the University of Stellenbosch and a PhD in Theology from the South African Theological Seminary. He served for 14 years as SATS’s Head of Academics before taking office as Principal in 2018. His interests lie in the spheres of biblical studies and theological education.

Mr. Jose de Carvalho has been lecturing at the South African Theological Seminary since 2012. In 2017, he earned an MTh in Biblical Studies from SATS. His Master’s thesis was titled, “Christocentricity without Christoconformity: An evaluation of the healing ministry of Jesus.” Jose is passionate about course development and has developed several New Testament courses for SATS, including 1 Corinthians, Romans, Ephesians, Acts, and Hebrews.

Keywords: discourse analysis, discourse markers, mutual submission, periodic sentence, point of departure
Since the proliferation of scholarly works examining Ephesians 5 through the lens of modern gender debates, the preferred segmentation of the text in many articles, commentaries, Bible translations, and Greek editions of the New Testament has shifted. Verse 21, “submitting to one another out of reverence for Christ,” is now commonly grouped with verses 22–24 instead of with verses 18–20…
Download Article
Read More 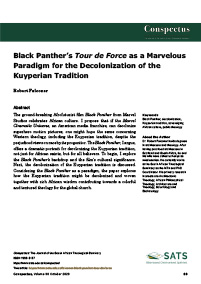 Dr. Robert Falconer holds degrees in architecture and theology. After having practiced architecture in Scotland and South Africa, he and his wife were called to Kenya as missionaries. He currently works at the South African Theological Seminary as the MTh and PhD Coordinator. His primary research interests are Architectonic Theology, African Philosophical Theology, Architecture and Theology, Soteriology and Eschatology. Rev. Dr. William (Bill) Domeris holds a PhD from the University of Durham (UK). He is a Senior Academic at the South African Theological Seminary and the author of several books including Touching the Heart of God (Continuum 2007), co-editor with Kevin Smith of The Students A-Z of Theology (SATS 2014), and with Zoltan Erdey of A Student’s Guide to the New Testament (SATS 2019). His research interests include both Old Testament (Amos, Deuteronomy, Jeremiah) and New Testament (the Gospels), with a particular focus on literary features (irony, metaphors) and social values (honour, dignity).

Keywords: doctoral supervision, postgraduate research, online education
Supervising graduate (postgraduate) students online brings several unique challenges, along with the normal routine of graduate supervision. In this article, I draw upon my own experiences at residential universities and for the past decade and a half, as an online supervisor…
Download Article
Read More 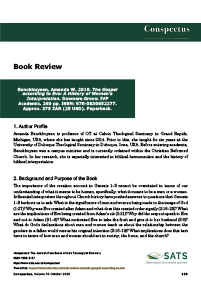 Book Review: The Gospel according to Eve (Amanda W. Benckhuysen) 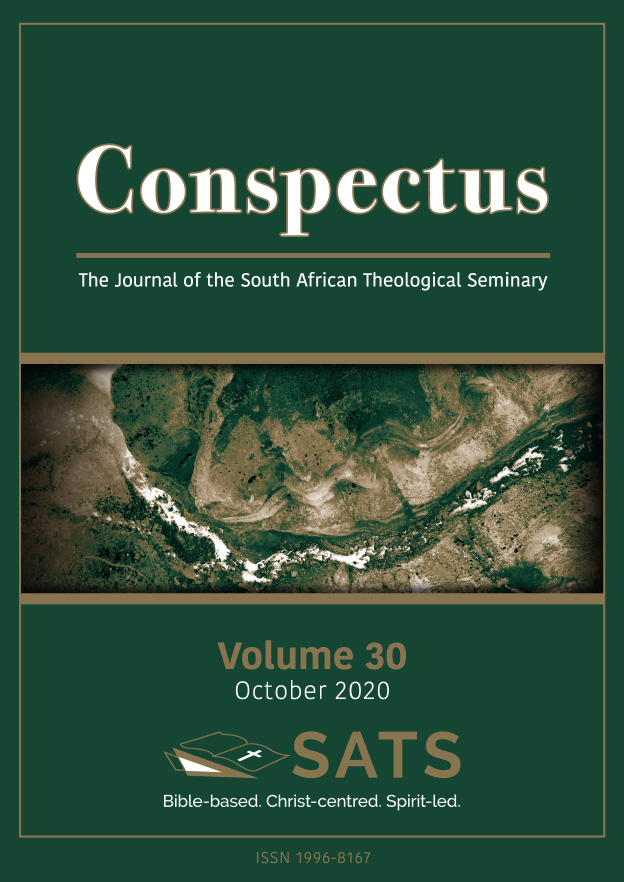