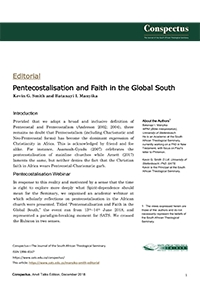 Editorial: Pentecostalisation and Faith in the Global South

Batanayi I. Manyika: (MPhil {Bible Interpretation}, University of Stellenbosch).
Batanayi is an Academic at the South African Theological Seminary, currently working on a PhD in New Testament, with focus on Paul’s letter to Philemon.

Smith K G and Manyika B I 2018. Editorial: Pentecostalisation and Faith in the Global South. Conspectus: Anvil Talks Edition, p. 1-4.

Provided that we adopt a broad and inclusive definition of Pentecostal and Pentecostalism (Anderson 2002; 2004), there remains no doubt that Pentecostalism (including Charismatic and Neo-Pentecostal forms) has become the dominant expression of Christianity in Africa. This is acknowledged by friend and foe alike…
Download Article
Read More 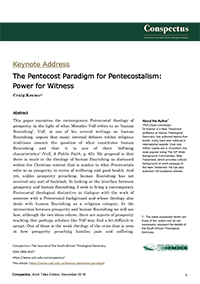 Keynote Address: The Pentecost Paradigm for Pentecostalism: Power for Witness

PhD (Duke University)
Dr Keener is a New Testament professor at Asbury Theological Seminary, has authored twenty-five books; many have won national or international awards. Over one million copies are in circulation, the most popular being The IVP Bible Background Commentary: New Testament, which provides cultural background on each passage of the New Testament. He has also authored 100 academic articles.

DTh (UNISA); DD (UP); PhD (UP); PhD (Radboud University).
Prof Nel holds doctorates in Practical Theology, Church history, Old Testament, and New Testament. He is a pastor of the AFM of SA. He was a lecturer at Auckland Park Theological Seminary for 23 years. He is the chair, Ecumenism: Pentecostalism and Neo-Pentecostalism and research professor at the Unit for Reformed Theology, Faculty of Theology, Potchefstroom campus, North-West University. His specializing fields are apocalypticism in the Old and New Testament, history of the Pentecostal movement, and Pentecostal hermeneutics.

Displacement is a challenge that many countries in Africa face, and in times of crisis citizens of these countries tend to cool their anger and frustration inter alia through violent acts of xenophobia. Another feature of the African scene (as a part of the global south) is the growth of the Pentecostal movement in its diverse forms, with classical Pentecostals, charismatic Pentecostals in mainline churches, neo-pentecostal groups already outnumbering members of the Roman Catholic Church in Africa, and the effect of a process of pentecostalisation followed by some mainline churches to integrate Pentecostal practices in order to keep their members…
Download Article
Read More 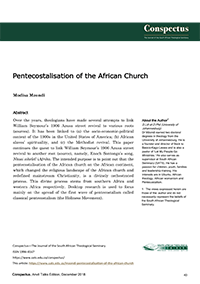 Pentecostalisation of the African Church

D.Litt et D.Phil (University of Johannesburg)
Dr Mzondi earned two doctoral degrees in theology from the University of Johannesburg. He is a founder and director of Back to Basics-Kago Leswa and is also a pastor of ‘Let My People Go Ministries.’ He also serves as supervisor at South African Seminary (SATS). He has a passion for children, youth, families and leadership training. His interests are in Ubuntu, African theology, African womanism and Pentecostalism articles. 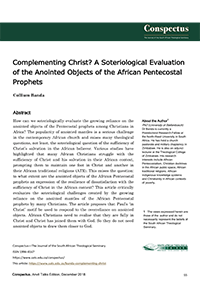 Complementing Christ? A Soteriological Evaluation of the Anointed Objects of the African Pentecostal Prophets

PhD (University of Stellenbosch)
Dr Banda is currently a Postdoctoral Research Fellow at the North-West University in South Africa. He has held a church pastorate and military chaplaincy in Zimbabwe. He is also an adjunct lecturer at the Theological College of Zimbabwe. His research interests include African Pentecostalism, Christian doctrines in the African public space, African traditional religions, African indigenous knowledge systems and Christianity in African contexts of poverty.

How can we soteriologically evaluate the growing reliance on the anointed objects of the Pentecostal prophets among Christians in Africa? The popularity of anointed mantles is a serious challenge in the contemporary African church and raises many theological questions, not least, the soteriological question of the sufficiency of Christ’s salvation in the African believer…
Download Article
Read More 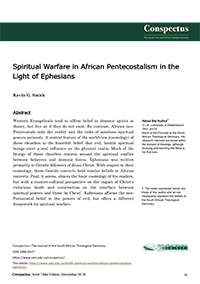 Spiritual Warfare in African Pentecostalism in the Light of Ephesians

D.Litt, University of Stellenbosch; PhD, SATS.
Kevin is the Principal at the South African Theological Seminary. His research interests are broad within the domain of theology, although studying and teaching the Bible is his first love.

Western Evangelicals tend to affirm belief in demonic spirits in theory, but live as if they do not exist. By contrast, African neo-Pentecostals take the reality and the risks of insidious spiritual powers seriously. A central feature of the worldview (cosmology) of these churches is the heartfelt belief that evil, hostile spiritual beings exert a real influence on the physical realm. Much of the liturgy of these churches centres around the spiritual conflict between believers and demonic forces…
Download Article
Read More 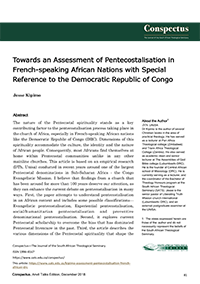 DTh, UNISA.
Dr Kipimo is the author of several Christian books in the area of practical theology. He has served as a lecturer at Pan Africa Theological college (Zimbabwe) and Trans Africa Theological College (Zambia). He also served as academic dean and senior lecturer at The Assemblies of God Bible college (Lubumbashi-DRC). He is the founder of Central African school of Missiology (DRC). He is currently serving as a lecturer, and the coordinator of the Bachelor of Theology Honours program at the South African Theological Seminary (SATS). Jesse is the senior pastor of Liberating Truth Mission church international (Lubumbashi- DRC), and an external postgraduate examiner at the UNISA.

Kipimo J 2018. Towards and Assessment of Pentecostalisation in French-speaking African Nations with Special Reference to the Democratic Republic of Congo. Conspectus: Anvil Talks Edition, p. 81-94.

The nature of the Pentecostal spirituality stands as a key contributing factor to the pentecostalisation process taking place in the church of Africa, especially in French-speaking African nations like the Democratic Republic of Congo (DRC). Dimensions of this spirituality accommodate the culture, the identity and the nature of African people. Consequently, most Africans find themselves at home within Pentecostal communities unlike in any other mainline churches…
Download Article
Read More 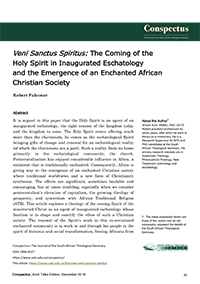 Veni Sanctus Spiritus: The Coming of the Holy Spirit in Inaugurated Eschatology and the Emergence of an Enchanted African Christian Society

BTech Arch, NMMU; PhD, SATS.
Robert practised architecture for seven years, after which he went to Kenya as a missionary. He is a Research Supervisor for MTh and PhD candidates at the South African Theological Seminary. His primary research interests are in Systematic Theology, Philosophical-Theology, New Testament, soteriology and eschatology.

It is argued in this paper that the Holy Spirit is an agent of an inaugurated eschatology, the tight tension of the kingdom today and the kingdom to come. The Holy Spirit comes offering much more than the charismata, he comes as the eschatological Spirit bringing gifts of change and renewal for an eschatological reality (of which the charismata are a part). Such a reality finds its home primarily in the eschatological community, the church. Pentecostalisation has enjoyed considerable influence in Africa, a continent that is traditionally enchanted…
Download Article
Read More 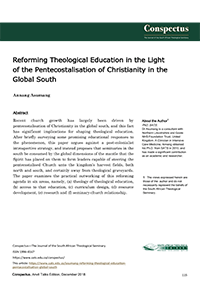 PhD, SATS,
Dr Asumang is a consultant with Northern Lincolnshire and Goole NHS Foundation Trust, United Kingdom. A Clinician in Intensive Care Medicine, Annang obtained his Ph.D. from SATS in 2010, and has made a significant contribution as an academic and researcher.

Asumang A 2018. Reforming Theological Education in the Light of the Pentecostalisation of Christianity in the Global South. Conspectus: Anvil Talks Edition, p. 115-148.

Recent church growth has largely been driven by pentecostalisation of Christianity in the global south, and this fact has significant implications for shaping theological education. After briefly surveying some promising educational responses to the phenomenon, this paper argues against a post-colonialist introspective strategy, and instead proposes that seminaries in the south be consumed by the global dimensions of the mantle that the Spirit has placed on them…
Download Article
Read More 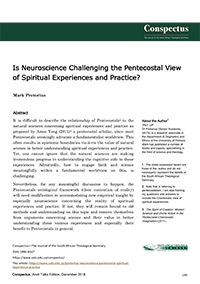 Is Neuroscience Challenging the Pentecostal View of Spiritual Experiences and Practice?

PhD, UP.
Dr Pretorius (Senior Academic, SATS) is a research associate in the department of Dogmatics and Ethics at the University of Pretoria. Mark has published a number of books and papers, specialising in the field of science and theology.

It is difficult to describe the relationship of Pentecostals2 to the natural sciences concerning spiritual experiences and practice as proposed by Amos Yong (2011)3 a pentecostal scholar, since most Pentecostals seemingly advocate a fundamentalist worldview. This often results in epistemic boundaries vis-à-vis the value of natural science in better understanding spiritual experiences and practice. Yet, one cannot ignore that the natural sciences are making tremendous progress in understanding the cognitive side to these experiences…
Download Article
Read More
12345678910111213141516171819202122232425262728293031323334 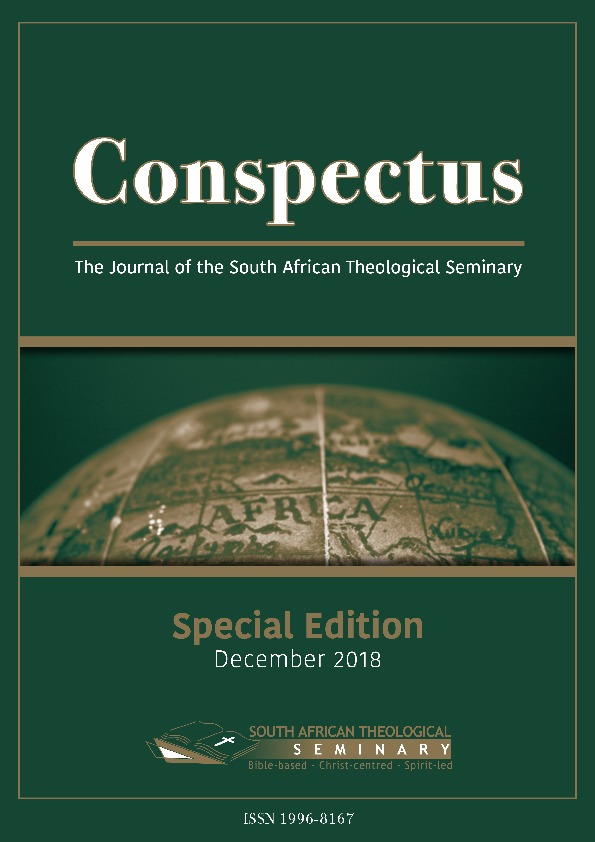