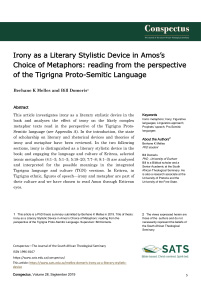 Irony as a Literary Stylistic Device in Amos’s Choice of Metaphors: reading from the perspective of the Tigrigna Proto-Semitic Language

Keywords: Ironic metaphors; Irony; Figurative languages; Linguistics approach; Prophets’ speech; Pro-Semitic languages
This article investigates irony as a literary stylistic device in the book and analyses the effect of irony on the likely complex metaphor texts read in the perspective of the Tigrigna Proto- Semitic language (see Appendix A). In the introduction, the state of scholarship on literary and rhetorical devices and theories of irony and metaphor have been reviewed. In the two following sections, irony is distinguished as a literary stylistic device in the book; and engaging the language and culture of Eritrea, selected ironic metaphors (4:1–3; 5:1–3; 5:18–20; 7:7–8; 8:1–3) are analysed and interpreted for the possible meanings in the integrated Tigrigna language and culture (TGN) versions. In Eritrea, in Tigrigna ethnic, figures of speech—irony and metaphor are part of their culture and we have chosen to read Amos through Eritrean eyes.
Download Article
Read More 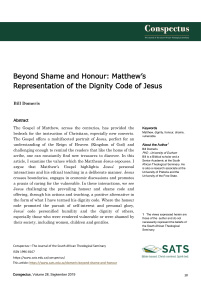 Beyond Shame and Honour: Matthew’s Representation of the Dignity Code of Jesus

Keywords: Matthew, dignity, honour, shame, vulnerable.
The Gospel of Matthew, across the centuries, has provided the bedrock for the instruction of Christians, especially new converts. The Gospel offers a multifaceted portrait of Jesus, perfect for an understanding of the Reign of Heaven (Kingdom of God) and challenging enough to remind the readers that like the home of the scribe, one can constantly find new treasures to discover. In this article, I examine the values which the Matthean Jesus espouses. I argue that Matthew’s Gospel highlights Jesus’ personal interactions and his ethical teaching in a deliberate manner. Jesus crosses boundaries, engages in economic discussions and promotes a praxis of caring for the vulnerable. In these interactions, we see Jesus challenging the prevailing honour and shame code and offering, through his actions and teaching, a positive alternative in the form of what I have termed his dignity code. Where the honour code promoted the pursuit of self-interest and personal glory, Jesus’ code personified humility and the dignity of others, especially those who were rendered vulnerable or were shamed by their society, including women, children and gentiles.
Download Article
Read More Eben de Jager
Masters Degree, UNISA.
He is a member of Spirasa (The Spirituality Association of South Africa). 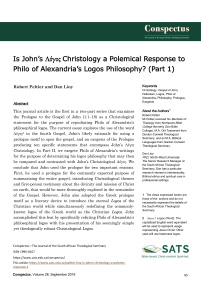 Keywords: Christology, Gospel of John, Hellenism, Logos, Philo of Alexandria, Philosophy, Prologue, Exegesis
This journal article is the first in a two-part series that examines the Prologue to the Gospel of John (1:1–18) as a Christological statement for the purpose of repudiating Philo of Alexandria’s philosophical logos. The current essay explores the use of the word Λόγος 2 in the fourth Gospel, John’s likely rationale for using a prologue motif to open the gospel, and an exegesis of the Prologue producing ten specific statements that encompass John’s Λόγος Christology. In Part II, we exegete Philo of Alexandria’s writings for the purpose of determining his logos philosophy that may then be compared and contrasted with John’s Christological Λόγος. We conclude that John used the prologue for two important reasons. First, he used a prologue for the commonly expected purpose of summarizing the entire gospel, introducing Christological themes and first-person testimony about the divinity and mission of Christ on earth, that would be more thoroughly explored in the remainder of the Gospel. However, John also adopted the Greek prologue motif as a literary device to introduce the eternal Logos of the Christian world while simultaneously redefining the commonly- known logos of the Greek world as the Christian Logos. John accomplished this feat by specifically refuting Philo of Alexandria’s philosophical logos with his presentation of his seemingly simple yet theologically robust Christological Logos.
Download Article
Read More 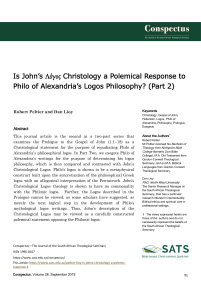 Keywords: Christology, Gospel of John, Hellenism, Logos, Philo of Alexandria, Philosophy, Prologue, Exegesis
This journal article is the second in a two-part series that examines the Prologue to the Gospel of John (1:1–18) as a Christological statement for the purpose of repudiating Philo of Alexandria’s philosophical logos. In Part Two, we exegete Philo of Alexandria’s writings for the purpose of determining his logos philosophy, which is then compared and contrasted with John’s Christological Logos. Philo’s logos is shown to be a metaphysical construct built upon the syncretization of the philosophical Greek logos with an allegorical interpretation of the Pentateuch. John’s Christological Logos theology is shown to have no commonality with the Philonic logos. Further, the Logos described in the Prologue cannot be viewed, as some scholars have suggested, as merely the next logical step in the development of Philo’s mythological logos writings. Thus, John’s description of the Christological Logos may be viewed as a carefully constructed polemical statement opposing the Philonic logos.
Download Article
Read More 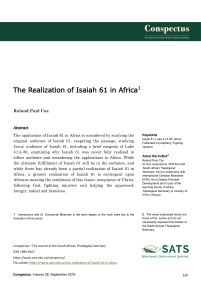 The Realization of Isaiah 61 in Africa

Roland Paul Cox
Dr Cox received his PhD from the South African Theological Seminary. He is a missionary with International Christian Ministries (ICM). He is Deputy Principle Development and is part of the teaching faculty of Africa Theological Seminary (a ministry of ICM) in Kenya. 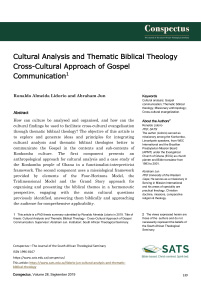 Ronaldo Lidorio
PhD, SATS
The author (Lidorio) served as missionary among the Konkomba, Limonkpeln speakers, from WEC International and the Brazilian Presbyterian Mission Board (APMT) under the Evangelical Church of Ghana (ECG) as church planter and Bible translator from 1993 to 2001.

Abraham Jun
PhD University of the Western Cape, He serves as a missionary in Serving in Mission International and his areas of speciality are practical theology, Christian doctrine, missions, comparative religion & theology.

Keywords: Cultural analysis; Gospel communication; Thematic biblical theology; Missionary anthropology; Cross-cultural evangelization.
How can culture be analysed and organised, and how can the cultural findings be used to facilitate cross-cultural evangelisation through thematic biblical theology? The objective of this article is to explore and generate ideas and principles for integrating cultural analysis and thematic biblical theologies better to communicate the Gospel in the contexts and sub-contexts of Konkomba culture. The first component presents an anthropological approach for cultural analysis and a case study of the Konkomba people of Ghana in a functionalist-interpretivist framework. The second component uses a missiological framework provided by elements of the Four-Horizons Model, the Tridimensional Model and the Grand Story approach for organising and presenting the biblical themes in a hermeneutic perspective, engaging with the main cultural questions previously identified, answering them biblically and approaching the audience for comprehensive applicability.
Download Article
Read More 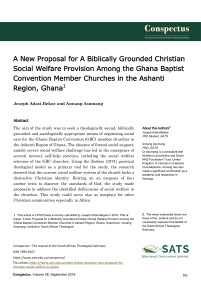 A New Proposal for A Biblically Grounded Christian Social Welfare Provision Among the Ghana Baptist Convention Member Churches in the Ashanti Region, Ghana

Annang Asumang
PhD, SATS
Dr Asumang is a consultant with Northern Lincolnshire and Goole NHS Foundation Trust, United Kingdom. A Clinician in Intensive Care Medicine, Annang has also made a significant contribution as a academic and researcher in theology.

Keywords: Joseph Adasi-Bekoe PhD Student, SATS
The aim of the study was to seek a theologically sound, biblically grounded and sociologically appropriate means of organizing social care for the Ghana Baptist Convention (GBC) member churches in the Ashanti Region of Ghana. The absence of formal social support, amidst severe social welfare challenge has led to the emergence of several mutual, self-help societies, including the social welfare schemes of the GBC churches. Using the Zerfass (1974) practical theological model as a primary tool for the study, the research showed that the current social welfare system of the church lacks a distinctive Christian identity. Relying on an exegesis of four anchor texts to discover the standards of God, the study made proposals to address the identified deficiencies of social welfare in the churches. This study could serve also as template for other Christian communities especially in Africa.
Download Article
Read More 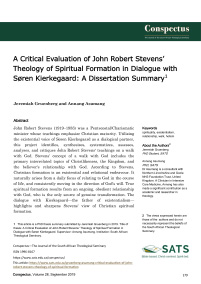 A Critical Evaluation of John Robert Stevens’ Theology of Spiritual Formation in Dialogue with Søren Kierkegaard: A Dissertation Summary

Annang Asumang
PhD, SATS
Dr Asumang is a consultant with Northern Lincolnshire and Goole NHS Foundation Trust, United Kingdom. A Clinician in Intensive Care Medicine, Annang has also made a significant contribution as a academic and researcher in theology.

Keywords: spirituality, existentialism, relationship, walk, holism
John Robert Stevens (1919–1983) was a Pentecostal/Charismatic minister whose teachings emphasize Christian maturity. Utilizing the existential voice of Søren Kierkegaard as a dialogical partner, this project identifies, synthesizes, systematizes, assesses, analyses, and critiques John Robert Stevens' teachings on a walk with God. Stevens' concept of a walk with God includes the primary interrelated topics of Christlikeness, the Kingdom, and the believer's relationship with God. According to Stevens, Christian formation is an existential and relational endeavour. It naturally arises from a daily focus of relating to God in the course of life, and consistently moving in the direction of God's will. True spiritual formation results from an ongoing, obedient relationship with God, who is the only source of genuine transformation. The dialogue with Kierkegaard—the father of existentialism— highlights and sharpens Stevens' view of Christian spiritual formation.
Download Article
Read More 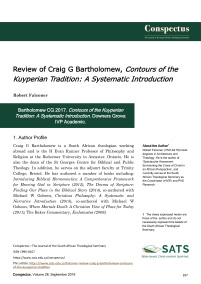 Review of Craig G Bartholomew, Contours of the Kuyperian Tradition: A Systematic Introduction

Robert Falconer ( PhD SATS ) holds degrees in Architecture and Theology. He is the author of ‘Spectacular Atonement: Envisioning the Cross of Christ in an African Perspective’, and currently serves at the South African Theological Seminary as the Coordinator of MTh and PhD Research.

Craig G Bartholomew is a South African theologian working abroad and is the H Evan Runner Professor of Philosophy and Religion at the Redeemer University in Ancaster, Ontario. He is also the dean of the St Georges Centre for Biblical and Public Theology. In addition, he serves on the adjunct faculty at Trinity College, Bristol. He has authored a number of books including: Introducing Biblical Hermeneutics: A Comprehensive Framework for Hearing God in Scripture (2015), The Drama of Scripture: Finding Our Place in the Biblical Story (2014), co-authored with Michael W Goheen, Christian Philosophy: A Systematic and Narrative Introduction (2013), co-authored with Michael W Goheen, Where Mortals Dwell: A Christian View of Place for Today (2011), The Baker Commentary, Ecclesiastes (2009).
Download Article
Read More 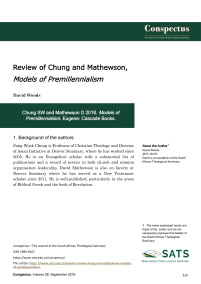 Review of Chung and Mathewson, Models of Premillennialism

Sung Wook Chung is Professor of Christian Theology and Director of Asian Initiative at Denver Seminary, where he has worked since 2005. He is an Evangelical scholar with a substantial list of publications and a record of service in both church and mission organisation leadership. David Mathewson is also on faculty at Denver Seminary where he has served as a New Testament scholar since 2011. He is well-published, particularly in the areas of Biblical Greek and the book of Revelation.
Download Article
Read More 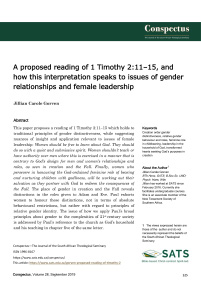 A proposed reading of 1 Timothy 2:11–15, and how this interpretation speaks to issues of gender relationships and female leadership

Keywords: Creation order gender distinctiveness, relative gender behaviour and roles, feminine role in childbearing, leadership in the household of God, transformed hearts seeking God’s purposes in creation
This paper proposes a reading of 1 Timothy 2:11–15 which holds to traditional principles of gender distinctiveness, while suggesting nuances of insight and application relevant to issues of female leadership: Women should be free to learn about God. They should do so with a quiet and submissive spirit. Women shouldn’t teach or have authority over men where this is exercised in a manner that is contrary to God’s design for men and women’s relationships and roles, as seen in creation and the Fall. Finally, women who persevere in honouring the God-ordained feminine role of bearing and nurturing children with godliness, will be working out their salvation as they partner with God to redeem the consequences of the Fall. The place of gender in creation and the Fall reveals distinctions in the roles given to Adam and Eve. Paul exhorts women to honour these distinctions, not in terms of absolute behavioural restrictions, but rather with regard to principles of relative gender identity. The issue of how we apply Paul’s broad principles about gender to the complexities of 21 st century society is addressed by Paul’s reference to the church as God’s household and his teaching in chapter five of the same letter.
Download Article
Read More
1234567891011121314151617181920212223242526272829303132 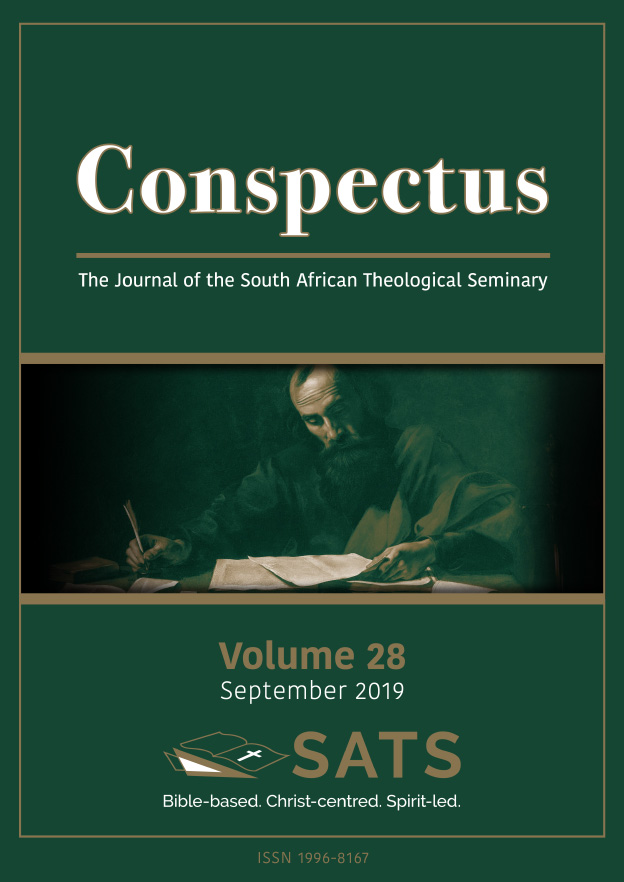