Why Evangelical and Liberal Theologies Are Irreconcilable by Kevin G. Smith

Why Evangelical and Liberal Theologies Are Irreconcilable by Kevin G. Smith

For some strange reason, evangelicals think this warning applies to sex but not to theology:

Can a man take fire to his bosom,

and his clothes not be burned?

Can one walk on hot coals,

The number of evangelicals who imagine that their faith is so secure that they can play the fire of liberal theology without being seared is bewildering, given our Lord’s warnings against false prophets and teachers. We cannot play their game (doing research in an unbelieving community that demands adherence to an anti-supernatural worldview and uses historical-critical methods) without reaping their fruits (eroded faith and empty churches)! It is self-deception because there is a cause-effect connection between four factors that produce irreconcilable differences between how evangelical and liberal interpreters handle God’s Word. What are those four factors? Let us briefly examine them.

Liberal theology borrows its biases from the Enlightenment, which demands a naturalistic worldview. The supernatural is excluded. If God exists, he is outside the scope of our knowledge. We cannot know or study God. We can only study people’s religious beliefs and experiences. General revelation is welcome because it relies on reason alone, but special revelation is excluded. 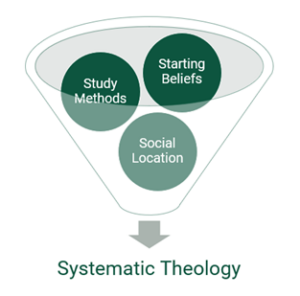 By contrast, evangelicals believe that God exists and that he has revealed himself to us. He inspired the Scriptures so that we might know him. We can know him, and knowing him should be the chief end of our theological efforts.

The liberal academy begins with the premise that God has not revealed himself and cannot be known (even if it is only ‘assumed for the sake of argument’), whereas the child of God starts with burning desire to know the Father. These starting points produce irreconcilable approaches.

To the naturalists, the Bible is a human book that must be studied just like all other works of history and literature. If they concede that it is inspired, they mean it only the sense that Michelangelo or Shakespeare are inspired. As a human work, it is subject to reason. We should accept what is reasonable and reject what is unreasonable. Therefore, the historical-critical method is used to decide what is true. Since the emphasis is on the Bible’s humanness, the supernatural is excluded. There are no miracles. Prophecy cannot happen. Any search for a metanarrative exposes a shameful attempt to impose one’s beliefs on others.

To the committed Christian, the Bible is the Word of God. It is inspired by God, who cannot lie. Therefore, it is inerrant, authoritative, and sufficient. What the Bible says (at the level of its intended message), God says. Because it is God’s Word, it stands over not under human reason, it has an authoritative message, and it has a unifying theme centred on Jesus Christ. It has prophecies and speaks of real miracles. It comes from God to draw us to God. God spoke in it then, and he speaks through it now.

These assumptions produce completely different faith communities, and we always interpret the Bible interpretation in a community.

The historical-critical guild has formed a counterfeit religious community. Although it would reject this assessment, it bears all the marks of a faith community. Firstly, it has its own statement of faith. To belong, you must accept its naturalistic beliefs about God, the Bible, the supernatural, and how to handle Scripture. Secondly, it has its own mission: to vigorously proselytise “fundamentalists” (its prejudicial term for anyone with biblical beliefs) to its unbelief. Its professors have lost their faith, but they keep teaching so that they can “help” their students to lose theirs. It would be better for them if a millstone were hung around their necks, and they were drowned in the depth of the sea (Matt 18:6). Thirdly, it has its own community of interpretation. The guild is as much a community of interpretation with its own presuppositions and traditions as is any church or synagogue.[1]

By contrast, we do evangelical theology in and for the church. It is done by people who know and love Jesus for and amongst people who know and love Jesus. It happens in a faith community with a mission. Everyone knows this, but not everyone realises that the same is true of the liberal community. They foist the lie that theirs is objective, scientific theology whereas ours is subjective and confessional. Both are subjective and confession. The contest is not between reason and religion, but between false and true religions.

The tree is recognised by its fruits—and so are false prophets (Matt 7:15–20). You cannot separate the assumptions, methods, and context of theology from its results. Historical-critical methods and their equally unbelieving postmodern counterparts inevitably lead to denials of biblical truths. It gives birth to heretics and heresies. It preaches a different “Jesus” and a different “gospel,” which is no gospel at all (Gal 1:6‒9). Its fruits are eroded faith and empty churches.

By contrast, when a community of people who love God gives itself to theological reflection by meditating on Scripture, it results in beliefs and practices that are faithful to the Lord and his Word. It preaches Christ, grounds faith, and grows churches.

Evangelicals courting the approval of the guild—do you see the red flag? You cannot use historical-critical methods in an agnostic academy and produce Bible-believing, Christ-centred exegesis and theology. There is no sound way to begin with their premises and methods and then move towards gospel-grounded conclusions. To do so, you must repudiate your starting point and, therefore, your entire study.[2] You cannot separate the findings from the premises and methods that you use. The liberal and evangelical approaches to theology are irreconcilable because there is a cause-effect relationship between starting beliefs, study methods, social location, and systematic theology.

Short Bio: Kevin, who is the Principal of SATS, obtained his first doctorate from Stellenbosch University and his Ph.D. from SATS. He has a deeply insightful approach to theology and has already made a significant contribution in his relatively short career.

Page load link
Manage Cookie Consent
To provide the best experiences, we use technologies like cookies to store and/or access device information. Consenting to these technologies will allow us to process data such as browsing behavior or unique IDs on this site. Not consenting or withdrawing consent, may adversely affect certain features and functions.
Manage options Manage services Manage vendors Read more about these purposes
View preferences
{title} {title} {title}