Valid vs. Invalid Literary Techniques Attributed to the Gospels

Valid vs. Invalid Literary Techniques Attributed to the Gospels

In my previous two blog posts, I discussed the literary criticism of Scripture. My deliberations were especially focused on the accuracy and reliability of the Gospels. This blog post seeks to continue that discussion by dealing with valid versus invalid literary techniques attributed to the Gospels.

To begin, some contemporary New Testament scholars posit that the presence of alleged, irreconcilable discrepancies, tensions, and contradictions within the Gospels (e.g. among the Synoptics, as well as between them and the Fourth Gospel) validates seeing these documents as examples of classical Greco-Roman biography. This literary type is referred as bioi or “lives.”

Mark Strauss (Four Portraits, One Jesus; Zondervan; 2020) explains that, by definition, ancient biographies were ‘written to preserve the memory and celebrate the virtues, teachings, or exploits of famous philosophers, statesmen, or rulers’. Examples of this genre include the following: Plutarch’s Parallel Lives; Suetonius’s Lives of the Caesars; and Jewish philosopher Philo’s Life of Moses.

Some specialists claim that the above storytelling convention prevalent within late antiquity permitted the inclusion of legend (or myth; i.e. mingling factual and fictional elements without historical warrant). So, as the argument goes, it is reasonable to surmise that each of the Gospel writers, at an epistemic level, felt at liberty to use fictionalizing literary devices in a clever, ingenious attempt to craft imaginary and contrastive narrative worlds.

Ostensibly, then, facts could be radically altered, dialogue embellished / extrapolated, and episodes rearranged for theological, ideological, and pedagogical reasons. It is asserted that this was while still giving a generally reliable façade (or echo) of a minimal “core” (or kernel) of what Jesus taught and enacted.

Expressed differently, the compositional approaches and rhetorical conventions in vogue when Jesus’ lived, and which the Gospel writers consciously adopted, allowed them to present events one way (that is, contrary to fact), for symbolic, noble-minded, and transcendent purposes, even when the underlying historical reality was quite different. Also, the Gospel writers intentionally drew upon instruction found within the catechesis of the early Christian community and portrayed Jesus as uttering these later-emerging, widely-accepted teachings.

It is postulated that the above is comparable to historical dramatization. By this is meant that only the impressionistic sketches of episodes being narrated are authentic, while artistic license justifies depicting various characters and events in a fictionalized form.

In response, analytic philosopher, Lydia McGrew, has subjected the preceding claims to a systematic and incisive examination. Of particular note is McGrew’s treatise, The mirror or the mask: liberating the Gospels from literary devices (DeWard; 2020).

McGrew ascertains that the minimalist / fictionalizing approach advocated by a cadre of New Testament scholars should be regarded as excessively conjectural and based on a dubious reading of the secular and biblical literary evidence. Four specific critiques arising from McCrew’s treatise are worth mentioning, as follows:

First, regarding the genre categorization of the Gospels, specialists continue to debate whether they were exclusively Greco-Roman biographies, more Septuagintal-Semitic in literary character, or an admixture of various literary influences.

Second, among the ancient secular and religious literature examined, there is little or no evidence supporting the minimalist / fictionalizing claims made by literary device theorists.

Third, there are simpler and far more plausible ways to explain alleged discrepancies, tensions, and contradictions within the Gospels than the complex and convoluted reconstructions emphatically held forth by literary device theorists.

Fourth, the minimalist / fictionalizing approach espoused by literary device theorists is an ad hoc, free-ranging hermeneutic in which little can be known with certainty about what Jesus of Nazareth actually said and did on numerous occasions throughout the entirety of His public ministry.

McGrew offers the following cautionary note (p. 51): “Before these theories about the Gospels are granted credence, they deserve careful scrutiny on the part of orthodox Christians, if for no other reason than that, if true, they would be seriously detrimental to the cause of the Gospel.”

Otherwise, as McCrew later explains (p. 248), readers would end up concluding that the “Gospel authors felt moved … to invent things that never occurred, to suppress things that did occur, or to exaggerate, in order to make a point.” Furthermore, McGrew (p. 339) states that, “in practice, [the minimalist / fictionalizing approach] amounts to taking a low view of the historical reliability of the document.”

So, instead of considering the Gospels as idealized presentations that are only loosely and nominally based on real events (technically referred to as literary reductionism), McGrew argues that the Gospels present straightforward history in a scrupulous, dependable, and verifiable manner (wherein even the smallest of details are anchored to space-time reality).

Because the foregoing accounts are based on credible eyewitness testimony, they convey empirically correct and evidentially truthful information (e.g. about Jesus’ virginal conception, baptism, crucifixion, resurrection, and so on). In this regard, Justin Martyr referred to the Gospels are the “memoirs of the apostles.”

Objective readers discover that the Gospels, like a contemporary research documentary or factual biography, treat Jesus and His followers as real persons, not as mere literary characters whom ancient writers / editors / redactors moved around like pieces on a chess board to suit their idiosyncratic preferences.

Furthermore, when it comes to genre categorization, Strauss identifies the Gospels, not as examples of classical Greco-Roman biography, but as “historical narratives motivated by theological concerns.”

McGrew clarifies that the above sorts of observations do not preclude the Gospel writers from utilizing widely recognized and accepted narrative techniques (in contrast to unacceptable practices), as delineated in the following chart: 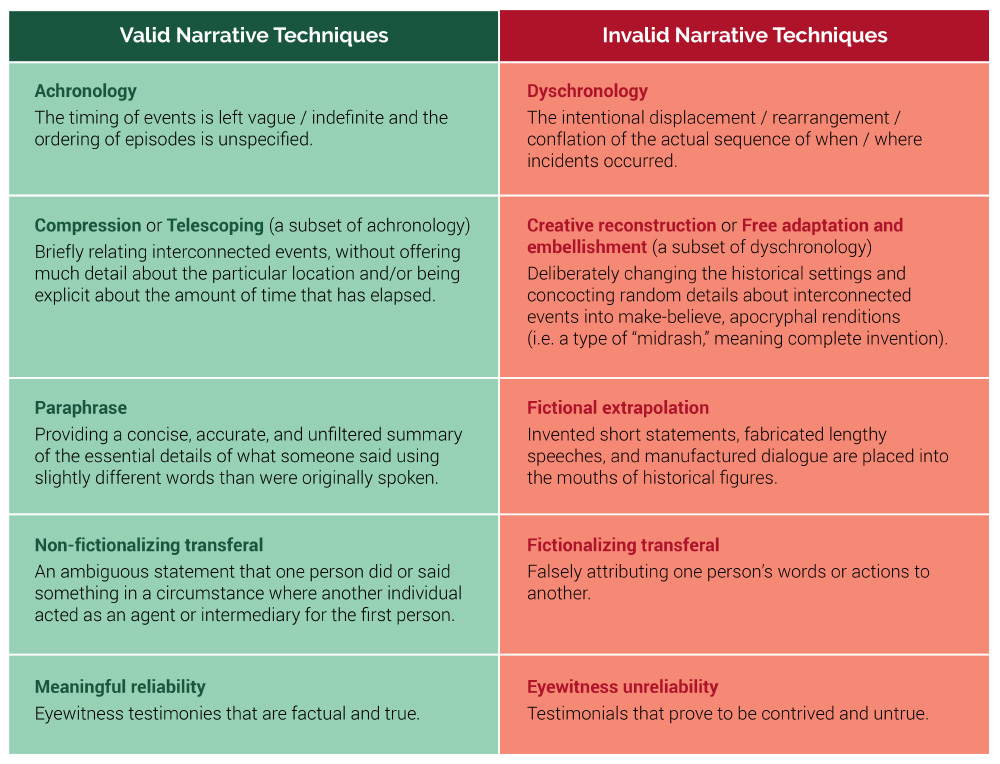 Short bio: Dan completed his doctoral studies at North-West University. He is widely published and has a particular interest in intertextuality between the testaments, Biblical ethics and spiritual care in professional settings. Dan has extensive experience in tertiary education and a passion for scholarly excellence.

Disclaimer: The views expressed in this article belong to the authors and do not necessarily reflect those of the South African Theological Seminary.

Manage Cookie Consent
To provide the best experiences, we use technologies like cookies to store and/or access device information. Consenting to these technologies will allow us to process data such as browsing behavior or unique IDs on this site. Not consenting or withdrawing consent, may adversely affect certain features and functions.
Manage options Manage services Manage vendors Read more about these purposes
View preferences
{title} {title} {title}